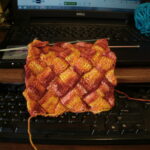 The first knitting project seems to be a scarf – but it isn’t. That’s how it was when I learned to knit – before there were circular needles. Actually, that’s not true, circulars were around about 40 years before I was. But still, scarves were the things to make first. But nowadays, the first thing we teach new knitters, is to make a swatch. That swatch can easily become the first knitting project.

A swatch is a block of knitting or crochet that is used to measure gauge – or how many stitches there are per inch with a specific stitch. Usually the swatch measures 4×4 inches. I am not from the ‘start by making a swatch’ tribe. I learned about swatches after I learned to knit. They weren’t interesting to me so I don’t make them. I also don’t teach knitting so I am not going against the new norm nor am I teaching a new generation of knitters to rebel. IF you have to make a swatch, make it something that can be useful.

Using a swatch for its intended purpose provides a need; but what do you dio with it afterward?

As I said, I don’t swatch – mainly because I don’t want to – but also because I don’t make fitted garments so it’s not a necessity. But I am a little intrigued by the swatch dictionary and I could do something of a swatch compromise by making squares and checking the gauge. It’s not a swatch; it’s a square.

If you need some ideas on what to make first, check out this article from Spruce Crafts.