The Need to Knit – and Blog About It 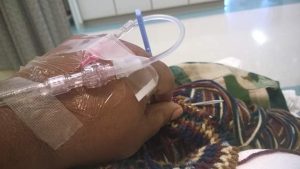 The need to knit is not stopped by something as inconsequential as a hospital stay. I was in the prep room waiting to be wheeled into surgery. I needed something to do and I had orders. That was valuable knit time.

I remember when we got our first PC and discovered that thing called the information super highway – or the Internet. There was some contraversy about Al Gore discovering it or some such thing.

And then there was that thing called a blog.

My blog was originally called the Knitter’s Restaurant because it was going to serve up all kinds of knitty dishes. It was on Blogger. Then I moved it to WordPress and a web host called Ipage. Moved from them when they started to get a little fishy and have been here with Inmotion for the past few years.

The blog itself has gone through some versions. But I believe we have settled into what feels right – talking about crochet, knitting, yarn, projects and that knit/crochet life.

I don’t think I had my shop when I started the blog. I don’t know which came first; the shop chicken or the blog egg. They are both crossing the road though. I’ve had my Etsy shop for twelve years. I think the shop might have come first.

There’s a great deal to explore in this life and the stops on this train land in places that are fun, spiritua; and free. Glad and blessed to share it.