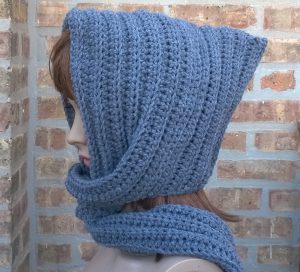 Saturday, all day, it was raining cats, dogs some mice and a unicorn. Russell Crowe was walking around the neighborhood with some wood and boat plans. That’s when I got an order to make one of these. I listened to the rain, sighed deeply, then went upstairs to get dressed in going out in the rain clothes.

It was after 6 pm and I told myself I could wait until rain stopped or the Apocalypse really started in earnest but nope, I wanted to go get my supplies and get the job done because I was certain…certain, I tell ya, I did not have this yarn in stock.

I went into the yarn room where the newly sorted yarn is sitting in the huge bags. Found the three bags that held the big yarns and cakes..and sitting on top of bag #2. Was a little less than half a skein of the gray fiber needed to make this hooded scarf.

I pulled it out and looked at it. Was this enough? There’s a lot of yarn in that scarf. I know I have a lot left over when I make one. This skein is probably a remnant from the last one I made. I never made attention to what was leftover. Note to self: pay attention next time. I weighed it…because..that just seemed the right thing to do to determine how much I used before to make a scarf. Thinking that’s why I had that skein to begin with. 7 ounces. It’s a 16 oz skein. Does that mean a scarf takes 9 oz and I won’t have enough? There are fewer things more frustrating to a knitter than being near the end of the project and they run out of yarn. You’d rather hear your mother-in-law say she misses your husband’s ex-girlfriend from high school. (My mother-in-law never did this.)

I took another deep sigh – I am getting so good at that – plopped myself down in my chair, pulled my J hook and went to work. It was soon quite clear there was more than enough. I finished most of it that night and finished it off.

This tells me a couple of things: my memory of what is and isn’t in my yarn stash makes going through my yarn stash thrilling because I can surprise myself. Thank goodness for the yarn sort. I have no idea where I would have found that half skein if it was still willy-nilly in the shopping bags. This saved me a lot of time and some money. Organization is a good thing. I am not going to have an unorganized stash again.

Don’t hold me to that. This is a in the moment declaration which may be followed by a dose of reality. The gods are laughing.

Hooks and Needles – The Aadi Cowl

Who Doesn’t Love a Freebie