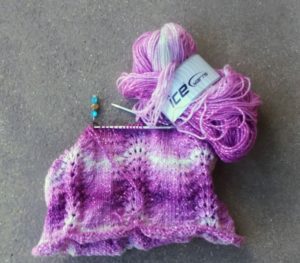 s ago, almost five years to the day, Apartment Therapy had an article on resources for people who wanted to start knitting. It’s the resolution thing.

During the Olympics both knitting and crochet got a boost because there were some athletes who knit and crochet while sitting in the stands – and they were males. There were two of them, right?

Knitting is one of those New Year resolution favorites. People say they are going to learn how to knit and makes hats and scarves and all kinds of things for their family, friends and home.

I wonder what the stats are on people who make that resolution, then go through with it and then learn how to make the forementioned hat, scarf or home decor. For as many people knit, there are more that don’t. It still amazes me how I can draw a crowd when knitting in public. People are fascinated by it and express an interest in wanting to do it but they don’t have ‘that kind of time.’ Which is the exact reason I don’t mountain climb. I don’t have that kind of time.

For the life of me, I don’t know what that means. Since it always said with something of a snooty tone and an upturned nose, I take it to mean they have better things to do with their time. There time is valuable. Well, OK. But I am usually in a craft show or around some stores when I knit. And those folks are shopping. I can make some of the stuff they’re shopping for. Which gives me time to watch them do it.