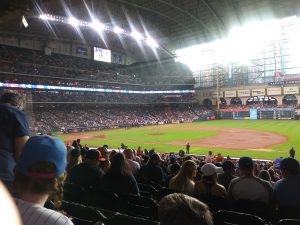 This is a baseball field. More specifically, this is Minute Maid Park. Mr. Honey and I have a thing we do. We love the Cubs but a few years back, we got a little tired of the trips to Wrigley.

Listen, we live about ten miles from the park. If you were to put our address and the park’s address into the Google, it would say it takes about 35 minutes to travel that 10 miles. Ha! That’s only if Moses shows up, parts the traffic and let’s our chariot through. It’s more than an hour and Wrigley doesn’t have a parking lot. They have remote parking lots. So remote you go to the parking lot and then take a bus to the park.

They have independent parking places and they make you pay for it. We usually take the bus that is less than a mile from our house and drops us off right across the street. It’s fine and great once you get there. It’s the best park in the league but the getting there will make you crazy.

We used to go up to Miller Park every year, known as Wrigley North because there used to be more Cubs fans than Brewers fans. But after a couple years of doing that, I announced we would be going to a different park every year – sometimes two- so we can get out of our comfort zone and actually take vacations.

What’s the significance of an esteemed (my word) citizen of Knitsville telling you about ballparks? Because it the only place I don’t knit. I’ve knit in ballparks before. There’s this thing called Stitch N Pitch I attended once. Just once. That was enough. I will knit everywhere. I am convinced I will be knitting at my memorial service. I will leave orders that anyone who can knit, should knit there. I will be leaving mass amounts of yarn behind so they won’t need to be that. Just needles, hooks and a snack and make a knit night of it.

But ballparks have seats very close together unless you’re in a luxury suite. And seriously, if you’re in a luxury suite, you’re not there for the baseball. And I actually enjoy the sport. But take a look at the photo and imagine someone knitting. Even the most compact knitter would have some trouble. If I were ever to do it, I would make sure I had people who loved me on either side. They couldn’t drink beer (cuz who wants that the smell or the actual beer on your fabric) and we would have to be sitting smack in the middle of the row. Why? Because people are constantly walking in and out of the row. If I am in the middle, I don’t have to be in a constant state of stand up, sit down. Knitters don’t like to be disturbed when we’re in a plush chair with a drink of our choice and the right music playing. You think we’re gonna be chill with people constantly disrupting the flow? That patience thing about knitters is a myth.

So there is a place where I don’t even bring the needles and I don’t mind because the game keeps my interest. It’s the only place. And I very happily pick them back up when the game is over.