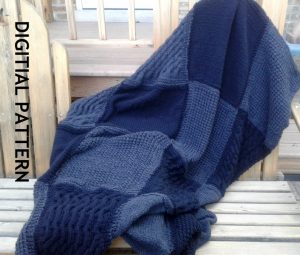 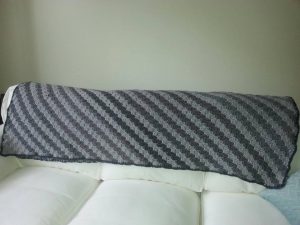 These afghans belong to my elder brother and eldest sister, respectively. I have four siblings; two of each, and they each have a afghan from me.

Except my elder sister, doesn’t believe that to be true. With each afghan that went to a sibling she reminds me that she doesn’t have an afghan.

“You got the first one.” I remind her. “You were the one that started this. Because I gave you one; I had to make one for everyone else.”

“You didn’t make me an afghan.”
“I was at your house when I was making an afghan and you asked for. I gave it to you.”
“But I used that one in my classroom.”
“You were free to do that.” I said. “Because it was your afghan. Otherwise, you would have taken my afghan and put it in your classroom.”
“I don’t understand.”

This is how it goes. This isn’t the first time sibling rivalry has shown itself when I give an afghan to a sibling. After giving the afghan to Carole (elder sister), I decided it would be nice if they each got one and decided the best way to go was to go in order. So, I asked Vel (eldest sister) her favorite colors. I made the mistake of asking on a conference call with the other sibs. So they wanted to know why she was getting one. Going in order. That seemed to calm the beasts a bit.

When Rick (elder brother) got his, we were all at his house in Phoenix for Thanksgiving. There was some discussion about how much effort I put into each one and that was somehow an indicator of who I liked best. There was a mention that Carole was never asked her favorite color the way everyone else was. Because you asked for the afghan I was making so you must have liked the colors enough. (That explanation didn’t fly.)

Recently, Facebook did a memory of Vel sending me a photo of her afghan on her sofa. I ain’t gonna lie, that afghan was a corner to corner and was a PITA. It looked good on her sofa and that was a saving grace. But along with the memory of the photo were to comments where Carole declared she never got the afghan in the picture so it must have been intercepted on the way to her since the post said my sister sent me a photo of her afghan.

“You have another sister.”
“What’s that got to do with anything?”
“It’s her afghan.”
“There’s something wrong with you.”

It was a pleasure to make all their afghans and give it to them. I felt as if I was given the gift. Despite the weirdness that comes from DNA, I know they all appreciate them. Will I make another one for Carole because she used her in a classroom in a school she no longer teaches? Nope.

I’m the youngest. I can get away with bratty moments.