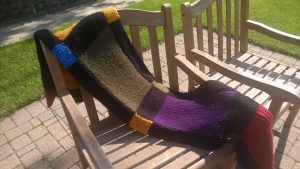 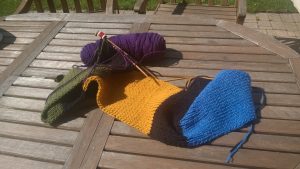 Hello lovely afghan, look at you sitting there all jeweled toned and elegant. I think you are beautiful and will be even more so when you are finished.

And therein lies the rub. I touched this beauty yesterday and got its hopes up that I was going to work on it some more. The truth is, I don’t even know where the yarns for it are. I haven’t worked on this for months. Months. And there’s another unfinished afghan in the same spot. They live next to each other in the living room and I am doing something of a spring cleaning of the living room (yes, it’s summer. It’s progress, trust me.) and I touched them both but just to move them out the way.

But they imparted such a feeling of guilt. Look at it. It will be beautiful. If I can ever get around to finishing it. And now, since the yarn is free ranging in the yarn room, it will be nigh near impossible to get them all together again.

So, I am asking it for forgiveness and saying thanks in advance because it is the nature of knits to be forgiving – except when they aren’t – but that’s rare. There are times when the yarn in a project just won’t cooperate. This is one of the reasons I tend to stay with yarns that are at least a 3. Though I have been known to work with thinner yarns, they have an attitude. Could be they’re hungry.

The way things work, I will eventually be able to complete it. I will run across the olive green that’s the cornerstone to completion. It will be more of a fate thing than a planned thing and that will be fine, too. But touching it yesterday brought up longing with the guilt. That must mean it has more of my heart than I realized. And where the heart is; the knitting will follow. One day.