I love Hayfield Colour Rich Chunky. I have a few skeins of it in I think three colors. It’s soft and squishy and I will get to review if this month because I am using it to make the Lacy Slouch hat. Here’s the thing: it’s discontinued. Can’t get more of it. Not even to be ripped off from EBay. No more of it. The closest I can find to sub for it is Premier Puzzle Yarn. But there’s nothing like the original one you find and I love the chunky stuff.

I started making the hat Saturday night after finishing the prayer shawl and yesterday morning right before I went downstairs, I thought that perhaps I shouldn’t continue making the hat with the Chunky. The colors weren’t lining up the right way for me and it would look a little too distracting because the marbling would look bad. Perhaps it would have been better if I frogged it and started over 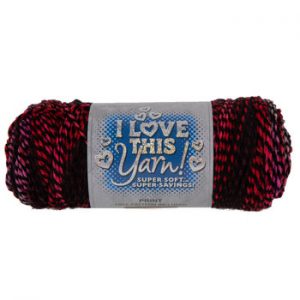 This skein, which happened to be right outside the

office door, was ready to spring into action. I took the skein, went downstairs and picked up the hat, which was really nothing more yet than the brim, and prepared to frog. But then a strange thing happened. The chunky made a protest. I was hit with, wait, this doesn’t look so bad. Where did I get the idea this wouldn’t look good?

From the other skein, of course. Shenanigans. Yarn shenanigans. I don’t think I’ve ever run into it before. One skein of print yarn dissing another. That’s almost rude. I actually have the I Love This Yarn – Print in gray and black. I used it to make the Basic Beanie for this collection so I’ll be able to compare the two side by side. But I never expected to have a rogue skein that wasn’t in the same colorway want to Bogart in and replace a hat that’s already started.

Of course now the question becomes: do I let the little bugger get away with it? Do I knit the next Lace Slouchy in the Strawberry Jam? It would look cute. It would stripe in those red and black shades. No denying it. But can we reward such behavior? Wouldn’t that encourage other skeins to put down their brethren? I want fiber tolerance. At the very least, the skein has gotten to come downstairs with the elite skeins.That could motivate others to follow.

There is only one Lace Slouchy in the next collection. I think a good consequence would be for the Strawberry Jam to sit that one out and we can discuss it again in collection 5. That’ll teach it.

The Need to Knit – and Blog About It

Anticpation is Making Me Wait