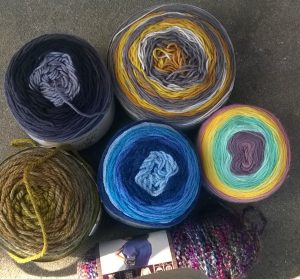 It’s raining today. It could be worse, it could be a few degrees cooler and we would be having snow. We’ve had enough snow. I’m not even complaining. Earlier this month, it was in the 40s and 50s and that definitely should not be happening in February in Chicago.

But a rainy day means no photography. We take our photographs outdoors here in Knitsville. Even in February. If it had been merely cold, I would have taken the WIP I have to show you and taken a photo outside. I could have shown you the shawl I’m working on – an original design.

I could have also showed you the poncho I am making for myself. First, I don’t make things for me. But this yarn – which happens to appear in the photograph – bottom left, is no longer made and the company is all out of it. There was nothing to do with the skeins I have and I purchased a pattern years ago for a granny square poncho. I am not, of course, following the pattern exactly but I am looking forward to wearing it.

I could show you the ten inch, wooden crochet hook that belonged to my mother-in-law probably made for her by her brother who was very good at that kind of woodwork.

I might have been tempted to show you my yarn haul. Back in November, I purchased yarn from JoAnn, Michael’s, Hobby Lobby and Herrschner’s. A fair amount went to orders – I was very busy during the holidays – but a better chunk is here for future use. I wasn’t supposed to get any more yarn until May but I also received gift cards from JoAnn for my birthday and I had another yarn haul a few weeks ago because I needed two balls for two orders I had and Cat and I went to the big JoAnn store with a huge yarn selection and they were having a sale and…well, I know almost exactly what the yarn I bought will be used for so it won’t just sit there and be pretty. Besides, I did mention gift cards didn’t I?

The good news is, the poncho is going to take a while to get done. I’m only working on it in the office. The pattern will also get done and the final object will have to be recorded and the yarn haul isn’t going anywhere any time soon, so it too, can have it’s photo taken at another time.

So, we have Rainy Days in Knitsville. But the rain will go leaving behind a freshened earth and some flowers that are beginning to poke their heads up above ground.  A worthwhile trade off.

In My Knitted Dreams