We are on the road every summer. I should say we are in the air. It depends on where we’re going. I think I might have mentioned that we go on Cubs away games during the baseball season. It started with us just going to Milwaukee once or twice but there were only so many times we could go there and the Milwaukee Zoo – which, if you like zoos is pretty good.

I felt the need to expand our horizons. So I suggested we go to a different major league ballpark every season. This, is the height for us. Our traveling before this was going to Disney World every other year. I don’t know how many trips we took before it hit me to just go in alphabetical order and make the deciding easier. Asking a question to Mr. Honey can take anywhere from one to sixteen weeks to get an answer. He likes to look at things from every angle and then make sure the angles don’t have angles that need looking at. So, I just tell him where we’re going early on so he can angle look all he needs before we eventually book the trip.

This plan was working really well until we discovered our nephew, he lives in Denver, didn’t see much of him growing up, is a baseball player. The kid loves baseball from the time he was three. He had to choose between baseball and lacrosse and chose the former. He is a really good player.

When I played college tennis, an away trip meant we got on a bus and traveled maybe two whole hours to a different school. For him, going to school in Phoenix, an away game was coming to Chicago. So two things I loved combined into one my nephew and baseball. I have to admit the kid is good. And I wasn’t the only one to think so. He was named WAC (Western Athletic Conference) Player of the Year.

So good he was just drafted by the Cincinnati Reds after finishing university in three years.

The road to the majors can be long. He was sent to Montana to play for the Billings Mustangs. So that’s where we went on one of our trips this summer. And we drove because it ain’t easy getting from Chicago to Billings through the air. Mr. Honey mapped the trip and I made just one minor adjustment for the return trip. 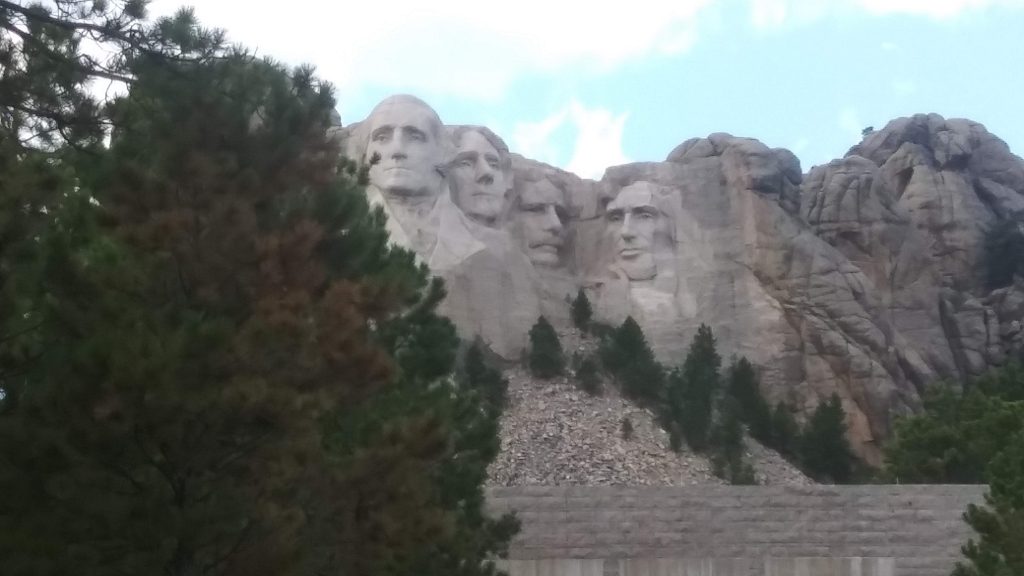 We were stopping at Mt. Rushmore.

Now let me say, I am directionally challenged. I can get lost in my own house (and I have) so when I thought of South Dakota and I wasn’t looking at a map, it was always to the right of Illinois. It is decidedly to the left.

I promised Mr. Honey we wouldn’t be there for long. We had some serious miles to travel to get to our hotel on the other side of the state. And since some of the park was closed for the rest of the year and I cannot walk really long distances, there wasn’t going to be much to do but look at the monument and pop into the gift shop to get some gifts for my three great nieces who are all under the age of ten and are already presidential historians.

So, we arrived at the park, tooks some photos, went to the gift shop and the bathroom and we were on the road again in under 30 minutes. Don’t think I wasn’t sufficiently wowed. I am impressed with seeing it in person. Never thought that would happen and if we didn’t have to get over to the Minnesota side of the state, I would have been happy to hang out until we could have heard a lecture or something.

This has been a big travel season on the road for us: Arizona, Texas, Wisconsin Minnesota, South Dakota, Wyoming and Montana. Three of the states I never visited and now I want to go through a list of the states to see how many of those I have left.

There was knitting done. I will save that for another post. Gotta leave ya wanting more.

We Got It Good

There Are No Words