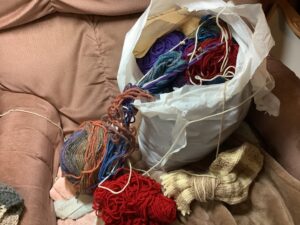 There is no use in denying being a wool pig. The term was first used by Stephanie in the Yarn Harlot blog. It was cute when I read it with no thought that status would be mine some day. There are traits I have had for some time but I believe, based on today’s events, I must embrace all that I am – that includes being a wool pig.

The story: Mr. Honey and I have been in our condo for two years and we are not decorating the place. We are going through the boxes for about the third time. The first two being the sorting of what to keep and what to donate. This last time being put it where it goes or trash it.

He came across the pictured bag. “I guess we throw this out.” says he. “You can’ throw that out.” says I. “That is the stuff that granny squares and BoHo knits are made of.” “Looks like garbage.”

More than twenty-five years together and it’s like he doesn’t know me at all. Don’t get me wrong; I have learned the art of throwing out yarn. I have thrown out a fair amount since the move. (Fair is in the eye of the beholder. It probably amounts to 5 balls of discontinued yarn that no one wanted when it was available.)

This yarn has potential. The truth is it will take me some time before I get to using this yarn. I have no idea what is lurking in there and it has to be sorted and balled. But potential is something. Isn’t it?