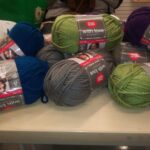 Do you see all this yarn? This is a knit or miss kind of thing. All of these skeins will never be used to make Mr. Honey anything.

Mr. Honey announced at the beginning of my knitting/crochet career that I might as well not think to make him anything because he will not wear it.

Now, for the sake of disclosure, this yarn was purchased in 2019 from JoAnn and I don’t think any of it has been made into anything. It is sitting in the domesticated yarn area of the craft room. That area is located behind the doors away from the free range yarn. We can’t have the breeds intermingly. That would be disastrous. So, it’s not like this was purchased with the idea that I would whip up something for my man.

What he meant was, I shouldn’t make him a sweater because he doesn’t wear them. This is somewhat true. My mom got him a sweater that looked really nice on him and he wore it once in a while when we used to do winter family get togethers but those were rare. So he has a dresser drawer filled with sweaters he doesn’t wear.

Yet, I had the thought I could make him that sweater that he wore once a year and that would be enough. Both our birthdays are in the cooler months so he could rock it on his birthday – or on mine. That would fulfill the requirement of having something made with love.

However, he will, upon occasion, raid my scarves. Though he would not wear a sweater I make, he has no problem building up a tidy scarf wardrobe. I will say, he only has a couple. He takes extremely good care of his things so he doesn’t need an annual scarf. I fear those would meet the same fate and the sweaters and see the inside of the drawer more than the inside of the coat collar.

I’m working on a scarf now that I don’t think he’s be interested in. It’s not very manly. But it is interesting and I like it. It’s called the Bamboo Stockinette Scarf and the item and pattern are coming. It’s not his thing – but someone out there will love it. 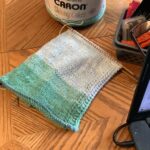 What’s Going On in There?