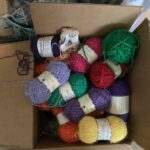 It’s Herrschners Suds and Scrub yarn. I got it because a friend said she was down to her last nylon scrubby and wanted to know if I made them. Well, I knew I could make them even if I hadn’t up to then. So, being me, I bought 20 balls of the stuff.

The funny thing is, I haven’t tried these for myself. I have dirty dishes and I have a piece of nylon that’s done more of its share of work. I don’t know why I just don’t take what I whipped up and place them on the sink and use them. There would be no more thorough person than Mr. Honey. That could be the problem.

I Wanted to Buy Yarn

On Hooks and Needles: Straight Outta