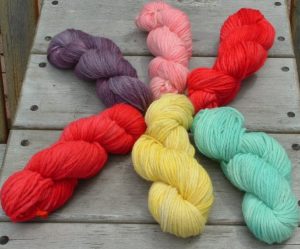 There was a time why I decided to indulge in dyeing some yarn. I used Kool-Aid. I still have one or two skeins from when I colored it – about eight years ago. The color is holding up. Which is why when people offer me Kool-Aid, I won’t touch the stuff.

I got nothing against one of the drinks of my youth. Except I find it hard to drink yarn dye. And that’s what Kool-Aid is to me now. Somewhere in the yarn room are honest to goodness dyes. Powders that are meant to hold wet yarn and turn it pretty colors. I can only find the green and have no idea where the rest are and I haven’t seen them in years, either.

I don’t think I’m being particularly paranoid. The stuff has stuck around, unfaded, on natural fiber going on a decade. Ain’t nothing more natural than a body. I think it would be perfectly accurate if on one of those murder mystery shows, the medical examiner opens a body and discovers a set of grape lungs and a cherry liver.

I’m not quite ready to jump back into the dye pool. It takes time and prep and there are other ways I’d rather spend my time. But it is a fun way to spend that time. When I was into it, I was really into it. I sold the skeins in the photo except the pale blue on the right. That’s the one that is still in the caged section of the yarn room. I don’t know that I have a desire to knit with it. I purchased the fiber for the purpose of dyeing it and I fill the duty is done. There’s nothing else to do with it. Kinda silly. I should knit with it if for no other reason to see how my dye job knits up.

It does pique the curiosity just a little. The next time I run across it, I won’t be in such a hurry to pass it by. A simple winter hat will probably do it. I don’t know how big the ball is but I can probably get a hat out of it. I still won’t touch the stuff to drink it. That ship has completely sailed.

I Don’t Even Know