The Yarn That Isn’t In the Photo 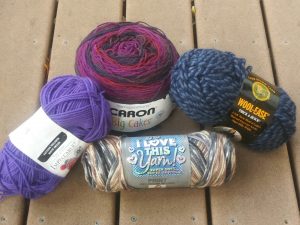 This looks like a nice portrait of a blended yarn family. Indeed, it could be. No knitter or crocheter would look upon this little group with disdain. (Well, those who don’t think acrylics ought to be used ever…they might. We leave them alone and try not to look at them full in the face.) The rest of us though, can appreciate the loveliness.

Except, and this happens every year, this yarn is supposed to be something. Something else. Other than pretty yarn. I see a hat and a scarf and another hat and another hat and a cowl. That part isn’t so bad. They will get there and that will be fine. It’s the yarn that isn’t in the photo that’s going to make me loonier than a cartoon song.

It’s almost Thanksgiving. In January is the annual Mr. Honey family get together and I bring an afghan to raffle off. The afghan itself is still yarn. Yarn I haven’t even picked yet. Not to mention, the afghan for my niece’s wedding is not done. She got married last month.They live in Arizona. It’s not like they won’t be warm without it but it will be a decorative piece. I hope.

The afghans are office projects. Projects I will work on for 1 to 3 hours every morning in the office – where I am not…not knitting. I was knitting, I was working on the EDS who decided to throw a curve into my timeline this morning.

I started working on the next collection in the midst f working on orders and that’s not going as well as I’d like because life…life continues to want to have attention paid to it. Because like also has a calendar but knows it will win in the end so it’s just a thing for show. Life really doesn’t need to track its own time.

I think it will work itself out. The EDS will be finished. Though each time I read the instructions, I have a moment of doubt. I will get the afghans done. Notice I didn’t say on time because one timeline is already shot. But I should have it for the January soiree.

The yarn that isn’t in the photo will be pretty things when you see them next. I hope.

We Got It Good