The Night I Fell in Love 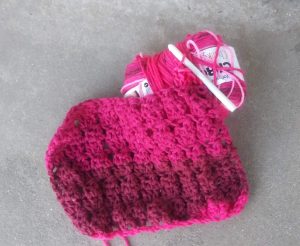 So, remember when I told you I made a cowl with Caron Chunky Cakes when I wasn’t really supposed to? Well, I was making one in the color I originally intended but it wasn’t going the way I wanted. I decided to use the hook size suggested in the band. The fabric was stiff and didn’t seem at all soft as the first one I made.

I know some colors of the same yarn can be stiffer or rougher than others but in the skein it was soft. I went up a.hook size and started over. I got the same result. It was stiff and didn’t feel right. I was again in my office – the scene of the original cowl crime – and saw the crochet hook that for me into trouble to begin with. I decided I would try the cowl again to see what would happen. I took the hook and began again in the evening.

And that was the night I fell in love. It was soft and chunky and looked full. It was every bit of everything the first one was. I was grinning from ear to ear as if I had just won both lotteries and the government decided not to take any taxes.

If course, it wasn’t enough to take that victory. I decided I wasn’t just in love with this Caron Cake and this cowl. Oh no, that would be too simple. I was in love with chunky knits as a.whole. I would need to go through the stash and find all my chunky yarns so I could make chunky scarves and recall some past chunky knits. Chunky knits showed up on the Etsy trend page so not only would I make them; they would sell because they were hot. I would get sales. I would have great fun doing it. There was no downside.

I’ve calmed down a little. I might have lost momentum at the thought of going through the stash. I am anxious to make this with a tea cake. I won’t have that chance for a bit because I already have the cowl for the next collection. Hopefully, I will remember.

With the completion of the cowl, I have done 6 of 10. I have a lace slouch, new hat pattern and another cable beanie and basic beanie to complete. The plan is to have it done by the end of the month but we will see.

Pray I stay on track. I can hear the chunky yarns whispering to each other. They may be calling for my seduction. I am vulnerable but I shall stay strong.

Tell You What I Want