The Need to Escape 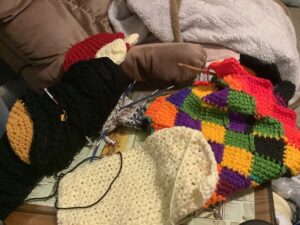 I’m feeling the need to escape. Went to a peace circle to speak about violence and it occurred to me the violent people weren’t there. So what good did we do? Of course we did good: we shared differently similar stories. We talked about the actions we could take and we now need a system where we hold ourselves – and each other – accountable.

It was with a group called the Community of Congregations.

I wore my shirt that says, I’d rather be knitting. And I rather wished I was.

When I came home, it was with the idea I would continue doing my work and looking at what’s going on; there’s not much knitting going on here, either. There are four projects represented here and only on is being knitted. But have noticed the progress on the reverse entrelac piece? Nice, huh?

Starting from the left: the black and gold is a Christmas stocking. So is the cream and red. That is a finished object and I will show it to you later. Next, that little bitty thing between the black and gold and the entrelac is a stocking cap order and the only knitted item. Then the entrelac and finally another square for the sample afghan. That is square 6 or 7 of 10. The collective is almost complete.

I have three other hats I need to make. I will be praying over them and every project I have. Praying that wherever that items winds up; whomever it belongs to, that they be people and places of peace, justice, truth and love. And I wish the same for you.