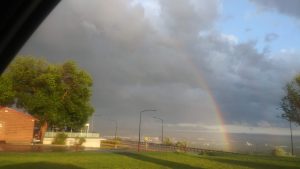 There be rainbows in Montana. There was a lot of rain. About the same time everyday and it lasted different amounts of time. We went there to watch the nephew play professional baseball. He is a Billings Mustang. That is the rookie affiliate of the Cincinnati Reds. We saw four games. I think they went 3-1. I saw him hit a home run live. I saw him hit one in college. So now if I see him hit one in the big leagues and in the All Star game, I would consider that a home run cycle.

I did go to a yarn store while I was there and the people were uber nice but I walked out without a purchase. It was a little pricey and the yarns I felt in my hands were a little rough. I would go there and knit with them but I don’t know that I would buy anything.

I also went to the biggest Hobby Lobby I have ever seen. I thought the one I went to was large. This store was humongous. It was like a warehouse. I eagerly walked all the way in the back through the ‘sewing store’ as the clerk told me, to find the yarn and…two aisles. I kid you not. Just two of the poorest stocked yarn shelves I have seen in my life. Don’t people get cold in Montana? Are there no knitters or crocheters? Seriously two shelves and I swear they didn’t have a huge selection of I Love This Yarn, either. I mean, I stood there in shock. You have all this store and this is all the yarn that’s managed. If I lived in Montana (which I wouldn’t mind) I would be voting someone out of office for not fixing this travesty of justice.

Luckily for me, I brought along enough yarn to do several – ok eight – projects. I wasn’t going to be staying long enough to do that many but a girl’s gotta be prepared. Like for a rainstorm which cancels the Saturday game leaving you with some unexpected time on your hands.

I did finish some projects. I also started a beanie which has since been finished but I finished it at night and I packed it away before it could get it’s photo taken. These are two of the items from the new collection. I am now working on the 5/10 item. I’ve done the cable beanie, did the basic beanie, designed a new hat (finished the pattern, took the photos), did the taffy pull scarf because I was desperate to work on something  and I’m now working on a prayer shawl. That leaves the new cowl, a lace slouchy – I may do a color switch -,and one more cable and basic beanie along with the new hat pattern playing in my head. I don’t have a deadline but I do have a plan to have this collection out in September. I am working towards the first week since I didn’t get this collection started right away.

It could be stressful and I admit, I am not having one of my better mood runs of late but there are rainbows in Montana. So there’s that.