Learned How to Line a Hat 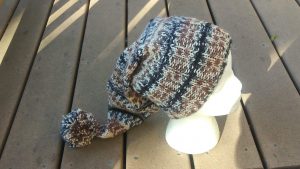 There is much to tell you. Snow came to Knitsville and it came on Halloween. That means Mr. Honey got the biggest haul of the candy. He bought one big bag of candy – which had only two kinds of candy I liked – so he was the one raiding the bag. With the snow and the cold, our doorbell rang maybe four times.

Halloween was also on a Thursday, which is our date night, so….I think most of Knitsville has their own candy stashes. Kids don’t care where it comes from. Not likely to go to waste.

The EDS continues. I even had the camera up to take a photo but I think orders might have gotten in the way. In any case, I am up to the increases for the sleeves/shoulder. There shall be a photo of something. Sometime. I’m pretty sure I promised it.

I got a message from a potential customer who asked if one of my hats was lined. Did I tell you this already? I offered to line and she took me up on it. So, I went to the YouTube and learned how to line a hat. I put the option of a lined hat in the listing instead of making it a custom item – and wouldn’t you know – someone else has ordered one. But now I know how to do because I learned how to line a hat.

I had been thinking about lining the hats for a bit now. But in satin, not fleece. But however I broke through, now that I know how, I think it will be slowly added to listings and promoted out. Plain, fleece, satin. Nice options. Raised the cost about $5 which is pretty reasonable.

It was a little nerve wracking but I know how it goes now. The learning curve wasn’t that long, either. Of course, I didn’t follow the instructions to the letter and I looked at a couple of videos and took something from almost all of them – including the fact that one of them was way too detailed. That was someone who liked that kind of detail in everything. The end result was great but I couldn’t tell if it was greater than the folks that didn’t do as many steps. I learned things from actually doing it that I know I will incorporate when I put the next one in.

I think this is a good idea now but if it takes off. I will be both happy and stressed. Oh boy. That’s kinda the best of no worlds. Looking forward to it.

Man Knits – Get it for him; Then Borrow It