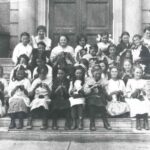 I looked up knitting and went to the end of the internet to see what was there. And what I found was an article where folks knit on demand. The soldiers needed to stay warm. They needed all sorts of knitted goods but socks were in high demand. (You can read the article here.)

Everyone got in on the action: men, women, girls and boys. Schools knit, churches knit. Japanese and African-American knitters formed groups.  The AA group was formed to make sure African-American soldiers received not only socks but other items as well.

Socks were the most requested because they kept poorly constructed boots from transferring cold directly from the ground.

The Special Olympics called for blue and white scarves for their athletes. It was a specific blue and the answer was so great, Red Heart ran out of the yarn.

If we hopped in the way back machine, we would find men doing most of the knitting and women doing almost none. But these days, it’s considered a thing that men knit and crochet. One Olympic story centered around Tom Daily and his knitting prowess. What he did helped make knitting a thing just as the pandemic made crochet cool.

There’s no telling how long the current trend will favor knit and crochet – and granny squares; granny squares are hot – but history believed in knitting and crochet long before we were born. For those of us that love it, we can connect with that history in a tangible way. It adds to that feeling that it isn’t just something that passes the time. It has a story all its own that’s worth knowing.

I Would Pick Knitting