Is That a Light?

The yarn room decluttering continues. Mr. Honey is a much better housekeeper than I. It made sense to me to ask him how I should start to tackle the free range yarn but then I remembered who I was married to.

Mr. Honey, when asked his opinion, never has one. He will either stare at you blankly or go into a dissertation on something that has nothing to do with the question. On the other hand, when you don’t need, desire or even thinking about asking his opinion, he is right there to tell you what to do.

So when I deferred to his domestic skills and asked how he thinks I should go about tackling the free range with the stipulation I wasn’t going to buy more containers; his reply was: “You have to clear it out.” Ahhhh.

But then he does his other Mr. Honey thing. He will come back 12, 24, 36 hours later and say “I’ve been thinking about your question.” He then proceeded to tell me about the idea of getting those big storage bags and some Velcro. I sort the yarn, I attach Velcro to each bag and attach the bags to each other and that way they will all be together.

Don’t mind the idea about the bags. They will take up way less space than the containers and will be more convenient. The Velcro idea is out because they don’t need to hang out together. Though I admit the thought of creating a yarn bag Stonehenge did occur to me.

He then took his idea way too far. “You can write down each thing you put in the bag and make two copies: one on the bag and one for you to keep.”

He forgot who he was married to. It’s like he doesn’t know me at all.

He bought me nine of those 20 gallon Ziploc big bags – because he’s an optimist and thinks that will be enough. The sort is being done by brand/type. So far, I have a bag for all the cake yarn and one pound skeins. One bag for yarn that comes from Hobby Lobby, a bag holding Red Heart yarn. I haven’t decided who else will share that bag but someone will and a bag with Lion Brand and Hayfield.

I’ve made myself a little giddy: i found some of my large yarn bobbins, a set of Chibi needles. I thought I had all of them and I vacuumed a space where bags of yarn used to be. Yes, I got giddy or vacuuming a small space. Be happy for me.

I thought I would take a photo the EDS – Elizabeth’s Daughter’s Sweater. I am on the section where I am putting in the increases and because I don’t understand what the designer is asking for, I am doing the increases my way. Acknowledging the written instructions are probably easier in the end.

The afghan is also coming along. I am adding five leaves a day and that should have me cruising end before we get on the plane. I am also on item 5/10. I finished the 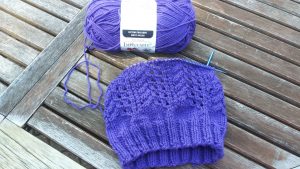 pattern. OK, you can get a taste. It’s the lace and cable beanie.

As long as I keep myself on task this first hour of the day, the sweater and the yarn room will advance. Is that a light? It’s an extremely long tunnel but I see something flickering. It’s not a train. It could be daylight. Let’s hope for the best.

And So It Begins

An Update on EDS