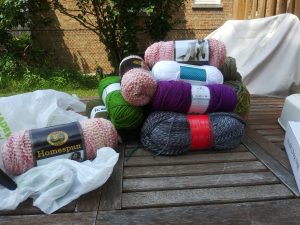 There is a difference. And it isn’t an elitist thing. There are people who knit and there are knitters. Want to know the difference?

someone who knits doesn’t have much of a stash, if any at all. They go to the craft store to purchase the yarn they need for their project and nothing more.

Knitters have a stash. When we go to get yarn, we buy it for the project we’re doing and for the one we haven’t thought of yet but we know this six balls of yarn will be perfect for it.

That same knitter will repeat buying yarn again before creating the nameless, faceless project the six balls of yarn were supposed to go to.

Those who know how to knit are far more generous than knitters are. We will give away yarn in small amounts. There are exceptions, Crystal on YouTube gives away an insane amount of yarn. We won’t give you our best yarn but we’ll give you something. Someone who knits will give you what they have. Really, what choice is there? They don’t have a stash. They just have some yarn. Again, this isn’t a dig. Sometimes I wish I were back there.

There are many other differences between the two. But there’s no shade. Every knitter was someone who knit. We just became obsessed. For me, I’ve always been a little obsessive compulsive. When I was into books, I had tons of books. I was at the bookstore every week. Same thing when I was into gardening.

I have more than 1000 balls of yarn and it’s because knitting has held my attention for so long. I turned it into a business and it remains a spiritual gift. I am surrounded with yarn and almost every day I look at adding more. I have limited myself to buying twice a year. The last buy was in May. The next one is December.

The countdown has begun.

A Day in the Life