or at least her gloves. 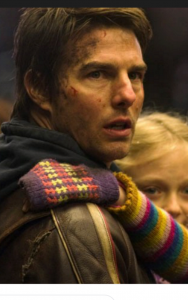 Way back in November, I received a message from someone wanting to know if I could make a pair of fingerless mitts like the one in the photo and how much it would cost.

I am here to admit that one of my flaws is haste. I shot back an answer with a price and what I received back was a note saying they wanted the gloves but her York mom said she had to save up for them. I have no idea what a York mom is. I don’t know it’s a typo of if she has two moms and the York one said she needed to save up. In any case, the order wasn’t going anywhere.

Until last night when I received a triumphant note saying the money was well and truly saved and she still wanted the gloves. She wanted them in purple, red and yellow just like the photo.

In my haste, I gave out the price without considering this will require three balls of yarn and to make it easier to work, it could require some duplicate stitching. Definitely will be some color work – intarsia – so not so bad. There’s no way to do these in the round. Have to knit them flat and the do a seam. And I can’t tell if the gloves have a thumb. I think so.

They should cost twice as much as I am charging.

I am going to justify it by saying it’s for someone who obviously had to save instead of just being handed the funds. I like that on her part and her mom. And I am going to get a pattern out of it.

So, the graph paper is out and I am designing a pair of gloves for a young one who is loving Dakota Fanning, or at least her gloves.