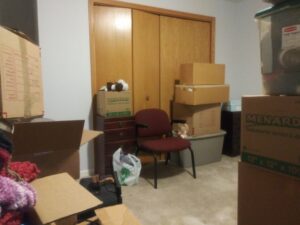 You know that saying the grass is greener on the other side? It’s true but we want to get on that other side anyway. I wanted to get to that other side in this moving thing and learn how to live in a condo.

That has happened.They moved us in two hours and we were living in a condo. It added one more thing to my list of things to do. I have to knit, run the business side of knitting, do church work, put together a new home and dismantle an old one. Did I mention there’s a pandemic?

I thought for certain I would be cooking that first night. Around four, I knew dinner from scratch wasn’t going to happen. I looked forward to doing it Tuesday and thought I had everything together only to learn I didn’t have a can opener, measuring cups or spoons. Maybe Wednesday.

Yes. We had our first home cooked meal that night. Cream of Chicken soup with wild rice and cornbread.

We’ve been coming here off and on since we bought the place and doing some stuff. The internet was running slowly after being fine the weeks before we moved in. It required a technician but it wouldn’t cost me anything. Things weren’t wired correctly. He fixed the problem and that was that.

I’ve hardly touched the knitting needles but that doesn’t mean I haven’t been working. I have a bunch of finished objects and I am putting them in inventory and placing them in the shop.

I will get to knitting this week and that will make this all make sense. Can’t wait to get there.