Our anniversary is coming? Know what I want? I’ll tell you what I want. Nothing material.

Thanks to a nice end of the year and beginning of the year and the Covid relief aid, I want for nothing material. I have yarn in weights from 2-6 and I recently went on a splurge of hooks and needles – so I’m all good there. (I went crazy for Zing are hooks, double points and circulars.) Then I went a little crazy for Susan Bates Silverlume hooks with the black handle. Bummed I couldn’t get the hook in J. It will come in stock again and I shall try and snare it.

I didn’t forget that last post I talked about making a tank top and even showed you a square I was doing for it. I finished it. 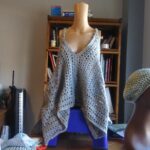 Turned out pretty nicely, too, if I say so myself. Turns out if is a pretty forgiving pattern as the four squares did not come out the same size.  I’m looking forward to making it in the dk weight cotton yarn I bought just for that purpose.

There are also some headbands that have been made. But there will be a little bit of a delay as I have had 2 orders (4 sales) and I have to get them out. Two of my bamboo cable scarves – which I will tell you about. The story is so cute. And a repeat customer who likes the lace slouchy hat. She ordered it in two more colors.

How could I want for something? Life is really good right now. The headbands and the tanks will go in the shop – and some hats, too. No, I’ll tell you what iI want. I want to express how grateful I am. For I am. Thank you God.

I might be obsessed with a new thing. I, of course, have this huge yarn obsession.Resistance to the yarn is futile. But I have also have hooks and needles. 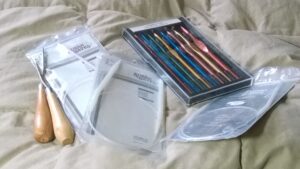 I have straight needles, circular needles, interchangeable and double pointed needles.Then there are acrylic, aluminum, nickle plated, bamboo and whatever Signature needles are made of. I have short crochet hooks, longer ones, bamboo, metal acrylic. Tunisian and afghan hooks, too.There’s even a pair of Knook needles.

I have a Inoxal that I love and wish I could find more to sibling the one that I have. But no such luck there. So, I am going to going to give it an adoptive sibling. My favorite crochet hook. The one Mr. Honey gave me that belonged to his mother. 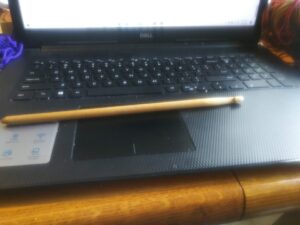 I do love this hook. And it’s handmade. One of Mr. Honey’s uncles was a master woodworker – what I call a whittler. He made beautiful stuff and we think he made this crochet hook for his sister. It looks to be a 9mm or about a L or M hook. I’ve used it and it works very well. There’s some writing etched or burned onto the end of the hook and it looks like it says size and nothing after it. Making something like this would certainly have been in his uncle’s wheelhouse. The man was great with woodwork.

I might be obsessed enough to ask my friend,Glen, to make me some hooks. He already made me the cross and flame emblem of the United Methodist Church. I’m thinking a set of hooks might not be such a bad thing to have.

No idea how much they would cost and if I would use them. There’s no one in the next generation even interested in crochet. Still, it’s something to think about.