This is a new beginning for a project that withered on the hook.You remember this from some time 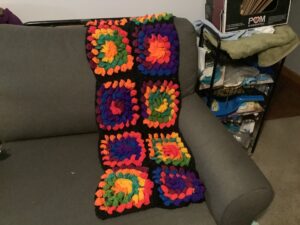 back? It hasn’t grown since then. I fell out of love with it and I didn’t want to save the relationship. Still loved the yarn – didn’t love the outcome,

So it just sat there.

Until I decided to look into doing something new. I thought I would give crochet entrelac a go. Saw it on a YouTube video. It seemed worth a shot.

It took me two days to learn. Two solid days. I have lost ground on other things because I was obsessed with mastering the techniques. Here are photos of my efforts: 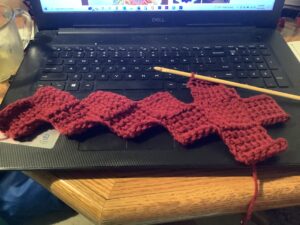 I was stuck here. I followed the instruction and it looked like what was in the video but didn’t work the same. This is after I commented on the video that I couldn’t make my sample wire. I was just getting a 2 square strip. The designer assured me the way to make it wider is shown in the video and I stayed up til 3 trying to fix.

When I woke up the next morning, the answer was waiting to slap me awake. Of course I had a two square strip, I was using a two square sample. It wasn’t going to get any wider until I added another row. So, watched again, followed the instructions and I got something that looked like sample in the video – see the photo – but left the squares on the left unworked. I went to one of the Facebook groups and found someone who had done it and she told me what the problem was but that still took me another few hours to work it out. 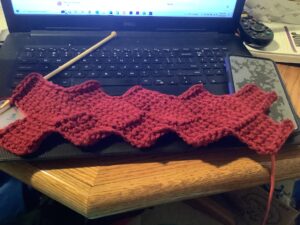 OK great. Figured it out. But I wasn’t digging the color. One of the ideas behind reversible entrelac is to let the color changes do the work.

That’s when I remembered the abandoned afghan. 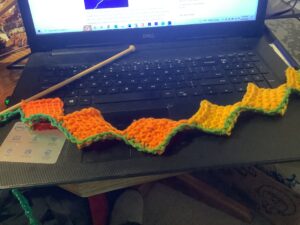